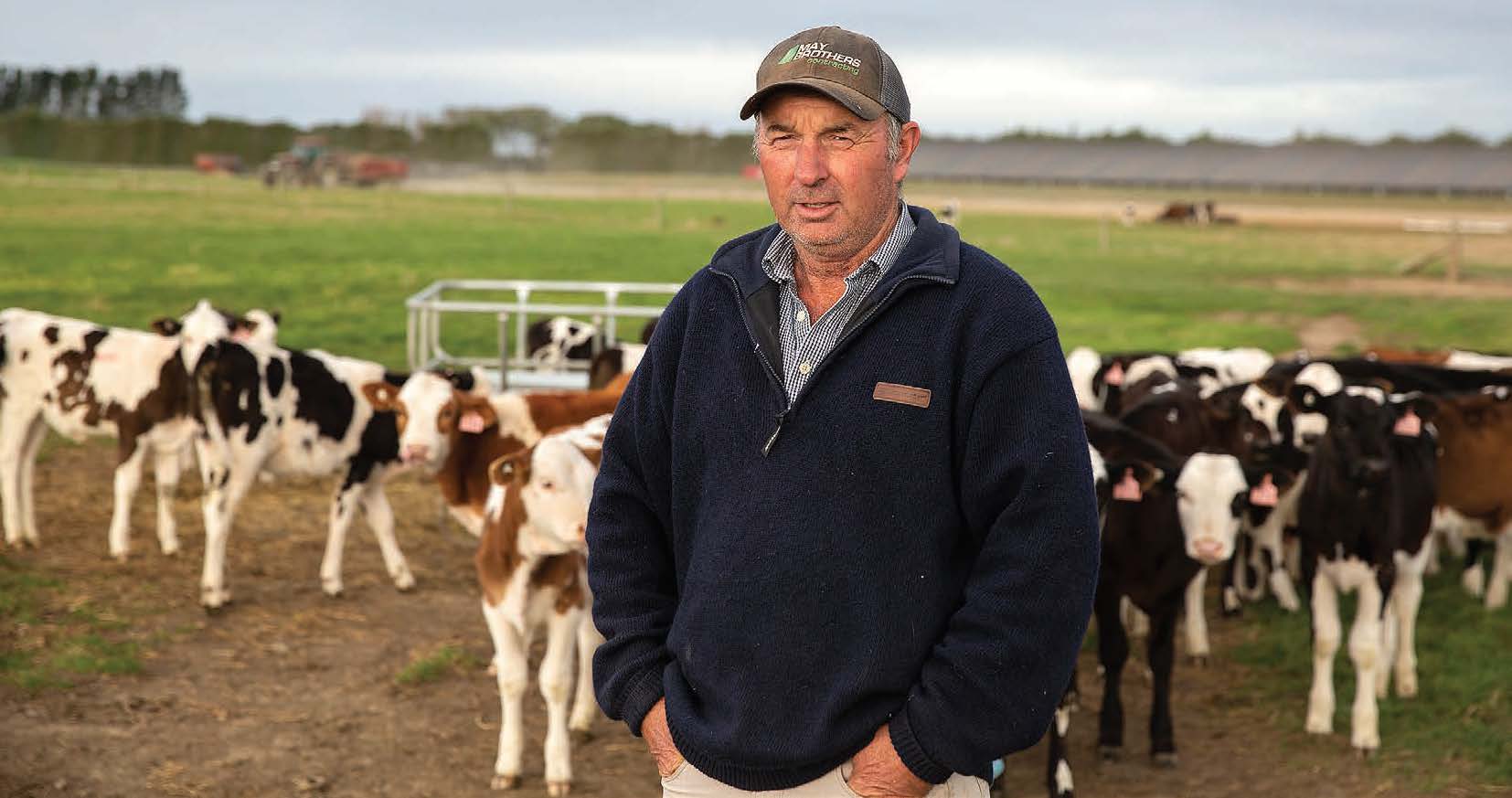 Using beef genetics over the herd, a Canterbury farmer is reaping the rewards of saleable calves and no longer has bobby calves.

Thanks to an innovative breeding policy that includes using sexed semen to get replacement heifers and beef breeds over the other cows, large-scale Canterbury dairy farmer Bruce Turpie sends away zero bobby calves.

Turpie milks 1600 cows on a 500ha dairy and cropping property near Methven and has an additional 130ha at Geraldine. He milks year-round fulfilling a winter contract with Synlait and calves four times a year to keep the operation running. Spring calving runs for six weeks, then there’s a three-week calving in December, six weeks in February-March, followed by three weeks in May.

He says while the system sounds complicated, it’s actually pretty simple. “We’re trying to keep the mating and the calving reasonably tight, so we’re not doing it every day of the year or anything,” Bruce says. “We just keep heifer replacements from the spring and the autumn mating so it doesn’t get too complicated with having different sized heifers running around.” He aims for annual production of 600kg MS/cow, and says sometimes high-producing cows aren’t ready to breed as soon after calving as farmers would like, so he gives them a second chance to get in-calf once they’ve put on more condition.

“If we have a 25% empty rate for each of those calvings, we’re very happy with that. They’re probably going to be some of the higher-producing cows that don’t want to get back in-calf until they’re 14 or 15 months apart,” he says. “They don’t get too many holidays but they do get one, when they’re allowed to breed 15 months apart.” Bruce reckons New Zealand farmers are sometimes too ruthless culling empty cows.

“That’s exactly the problem with the NZ seasonal system. Everyone is culling their best-producing cows because they’re not ready to breed. It can take 80 days for some of these high-milk cows to reach the balance point as far as putting condition back on again after calving.” After a period of building up numbers to reach the current herd size, he says they no longer need as many replacement heifers, so each year only the top third of his cows are mated to dairy breeds, with the rest going to beef bulls.

“We’ve got milk meters and anything that’s not doing more than 30 litres production per day doesn’t get the opportunity to give us a heifer calf so they’ll be AI inseminated with either Wagyu or a Belgian Blue followed with Wagyu bulls,” he says. The half beef-breed offspring are sought-after, with the Wagyus in demand from as young as one-week-old through to weaning at 90kg. The Belgian Blues are in demand too, but this year he’s finishing some on the Geraldine property.

“We‘re just doing a wee trial at the moment to take some through to finishing and see how long that takes, and to see how the numbers stack up,” he says. For the dairy herd replacements, sexed semen is used, alongside heat-detection systems on the cows so mating can be timed perfectly to maximise conception.

“You’re breeding them closer to ovulation than you do with conventional straws. With the monitoring system you get two lines on the computer screen that basically show the right hours to breed so we breed twice-a-day for about 12 days each time,” he explains. Bruce says he’d like to “toughenup” his Holstein herd so he’s adding American Holstein, Swedish Red and French breed Montbéliarde genetics to the mix.

“Breeding is my favourite thing really. I don’t have time to put cups on or anything in the shed, we employ people to do that, and I spend hours on the genetic side of it,” he said. A positive side effect of his breeding policy, Bruce says is he no longer has any bobby calves to deal with, which ties in nicely to his gold elite status under Synlait’s Lead with Pride scheme. “It’s not compulsory to have no bobbies, but they do expect you to explore every avenue to reduce them as much as you can and we just don’t want to be putting hundreds of bobby calves on the truck,” he says.

He believes pressure against bobby calves is growing in foreign markets. “NZ farmers perhaps need to think a bit harder about some of these things, but realistically we can’t have every farmer in the country keeping all their calves because there’s just nowhere for them to go.” Nevertheless, he’s pleased to have found a way to stop the bobby truck from calling at his place and make the most of every calf born on his farm.